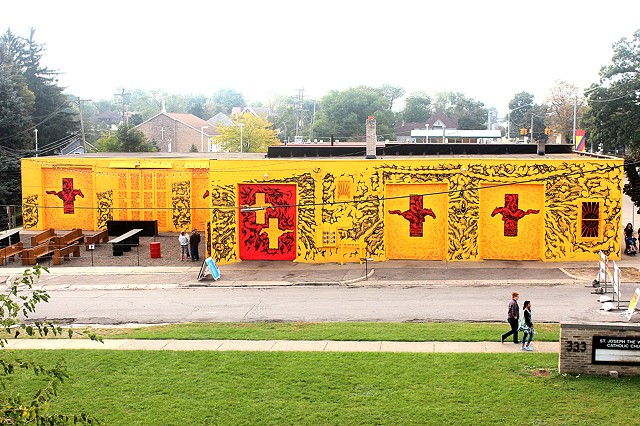 Pony Show puts the Cult in car-culture. Mark Dean Veca's monumental mural installation is a shrine to the American Car, particularly those that rolled out of Detroit in the 1960's like Veca's first car the Ford Mustang (which sparked a new denomination, the Pony Car). Painted in Carbon Black, Candy Apple Red, and Glorious Gold on the exterior of a former auto repair shop, it's roll-up doors are emblazoned with the cruciform Mustang logo and framed by Pop-Baroque ornamentation-- a pyschedelic synthesis of Gianlorenzo Bernini and Rick Griffin. At once celebrating and criticizing our fanatical devotion to the automobile, Pony Show is a schismatic spectacle of epic proportions.

For 2015 and 2016, SiTE:LAB has been presented with a unique opportunity for its most ambitious project to date. Habitat for Humanity of Kent County has offered SiTE:LAB the use of nearly three acres of land in Grand Rapids’ Roosevelt Park neighborhood. The plan is to turn the land and existing structures into a temporary art center and residency until Habitat begins its redevelopment of the properties starting in 2017.